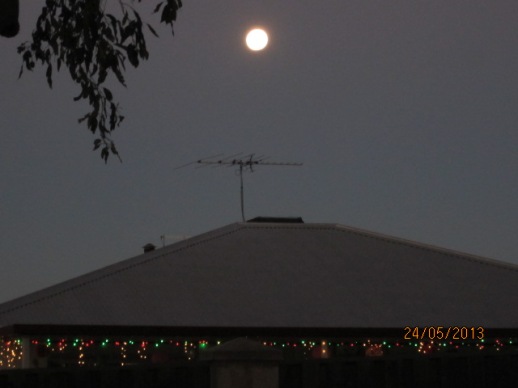 The Vesak moon as seen from Patacara BHikkhuni Hermitage on 24th of May 2013.

Patacara Bhikkhuni Hermitage celebrated Vesak – the birth, enlightenment and passing away of the Buddha, this year with a two day non-residential meditation retreat on Friday, 24th of May and Saturday, 25th of May.

The Volunteers hung up Vesak lanterns,lights and flags in the evening of 22nd May at Patacara Bhikkhuni Hermitage.

On Wednesday, two days before the Vesak 2013, four of our regular lay supporters came to hang up Vesak lanterns, lights and Buddhist flags to celebrate the most important occasion of the Buddhist calendar. As all of us had some experience last year with Vesak celebration, the preparation went smoothly and harmoniously. We managed to finish the preparation by 8.00pm.

Vesak day this year fell on Friday, 24th of May. It was a beautiful sunny day. There were about eighteen people participating in the Vesak Meditation Retreat this year. We paid our highest respect to the Lord Buddha by keeping the precepts, practising meditation and contemplating the Dhamma. As in the ‘Mahaparinibbana Sutta’ in the Digha Nikaya:

‘the Lord said:’ Ananda, these sal-trees have burst forth into an abundance of untimely blossoms, which fell upon the Tathagata’s body, sprinkling it and covering it in homage….. Divine music and song sound from the sky in homage to the Tathagatha.  Never before has the Tathagata been so honoured, revered, esteemed, worshipped and adored. And yet,  Ananda, whatever monk, nun, male or female lay-follower dwells practising the Dhamma properly, and perfectly fulfils the Dhamma-way, he or she honours the Tathagata, reveres and esteems him and pays him the supreme homage. Therefore, Ananda, ” We will dwell practising the Dhamma properly and perfectly fulfil the Dhamma-way”— this must be your watchword.’

As Vesak is the celebration of the birth, enlightenment and the passing away of  the Buddha,  this year we investigated the themes of Old Age, Sickness and Death. We chanted the ‘Five Subjects for Frequent Recollection’ from the Anguttara Nikaya Sutta 57, during the retreat, and also used the themes as our contemplation during meditation sessions.

FIVE SUBJECTS FOR FREQUENT RECOLLECTION
Jara-dhammomhi jaram anatito
I am of the nature to age, I have not gone beyond ageing.

Byadhi-dhammomhi byadhim anatito
I am of the nature to sicken, I have not gone beyond sickness.

Marana-dhammomhi maranam anatito
I am of the nature to die, I have not gone beyond dying.

Kammassakomhi kammadayado kammayoni kammabandhu kammapatisarano. Yam kammam karissami kalynam va papakam va tassa dayado bhavissami.
I am the owner of my kamma, heir to my kamma, born of my kamma, related to my kamma, abide supported by my kamma. Whatever kamma I shall do, for good or for ill, of that I will be the heir.

Ayya Vayama Bhikkhuni, Ayya Seri Bhikkhuni and the participants on Vesak day, 24th of May 2013 at Patacara Bhikkhuni Hermitage.

At the end of the day of practice on Vesak day, we  had a small ceremony to pay respect to the Bodhi Tree, the tree the Buddha sat under when He attained enlightenment. The ceremony reminded us that the goal of our practice is for liberation and freedom, Nibbana.

Subha the cat,  during the Vesak Meditation Retreat 2013 at Patacara Bhikkhuni Hermitage.

This is one of my favourite suttas on Old age, Sickness and Death from the Sutta Nipata:

The Salla Sutta – The Dart
A recollection on death
1 Life is unpredictable and uncertain in this world. Life here is difficult, short and bound up with suffering.
2 A being, once born, is going to die, and there is no way out of this. When old age arrives, or some other cause, then there is death. This is the way it is with living beings.
3 When fruits become ripe, they may fall in the early morning. In just the same way a being, once born, may die at any moment.
4 Just as the clay pots made by the potter tend to end up being shattered, so is it with the life of mortals.
5 Both the young and the old, whether they are foolish or wise, are going to be trapped by death. All beings move towards death.
6 They are overcome by death. They go to the other world. And then not even a father can save his son, or a family their relatives.
7 Look: while relatives are watching, tearful and groaning, men are carried off one by one, like cattle being led to the slaughter.
8 So death and ageing are endemic to the world. Therefore the wise do not grieve seeing the nature of the world.
9 You cannot know his path as to where he has come from, or where he is going to. So it makes no sense to grieve for him.
10The man who grieves gains nothing. He is doing no more than a foolish man who is trying to hurt himself. If a wise man does it, it is the same for him.
11 Peace of mind cannot come from weeping and wailing. On the contrary, it will lead to more suffering and greater pain.
12 The mourner will become pale and thin. He is doing violence to himself, and still he cannot keep the dead alive; his mourning is pointless.
13 The man who cannot leave his sorrow behind him only travels further into pain. His mourning makes him a slave to sorrow.
14 Look at beings who are facing death, who are living out the results of their previous deeds; people are terrified when they see that they are trapped by death.
15 What people expect to happen is always different from what actually happens. From this comes great disappointment; this is the way the world works.
16 A man may live for a hundred years, or even more, but in the end he is separated from his relatives, and he too leaves life in this world
17 So we can listen and learn from the noble man as he gives up his grief. When he sees that someone has passed away and lived out their life, he says ‘he will not be seen by me again.’
18 When a house is burning, the fire is put out by water. In the same way the wise man, skilful, learned and self-reliant, extinguishes sorrow as soon as it arises in him. It is like the wind blowing away a tuft of cotton.
19 The person who is searching for his own happiness should pull out the dart that he has stuck in himself, the arrow-head of grieving, of desiring, of despair.
20 The man who has taken out the dart, who has no clinging, who has obtained peace of mind, passed beyond all grief, this man, free from grief, is still.

Ayya Vayama Bhikkhuni, Ayya Seri Bhikkhuni, together with Jacky and the participants on Saturday, 25th of May 2013, the Vesak Meditation Retreat at Patacara Bhikkhuni Hermitage.

May all of us continue to practise to pull out the dart in our heart, for freedom and liberation, for Nibbana.